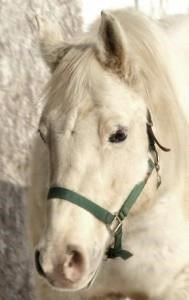 I’ve had McCool since September of 2013.  Details are a bit scanty, but apparently he was on a trail string up north somewhere and ended up in the stockyards. Then went through a dealer, turned out to have behaviour problems and was bound for another sale.  An equine listing service stepped in and convinced me to take him on.

I bought him from the dealer and started checking him out a little bit. The first thing I did was have his teeth done.  Kathy Kivi DVM came and did some fairly major dental work on him.  He was gouging out the insides of his cheeks with the razor blades that his teeth had become.

He had a lot of body issues as well. Saddle fit is pretty important to him. He gets quite upset if things don’t fit perfectly. He does not like downhills, and if the saddle slides forward at all, he balks and swishes his tail quite angrily.  I found a rather nasty knot behind his shoulder blade that looked like old saddle fit damage, so he has some history there. The chiropractor adjusted him over the winter and found a lot of issues as well.

He seems a lot better when I ride him in my Barefoot London treeless saddle. My australian saddle sets off his balky attitude. And I tried a Torsion treeless on him recently and that didn’t go too well either. I am wondering if perhaps it’s something to do with where the girth sits or how much it slides forward (the Torsion went right forward on a downhill and he was visibly irritated by it).

I’m not sure that we’ve found all of McCool’s issues yet.  But he’s improved and is definitely more comfortable. I have ridden him a bit, and have not had any serious issues. I haven’t pushed him of course. Nor do I intend to.

He is a very bold guy. Quite forward under saddle, especially when we are heading out. Going home he is sometimes a bit less enthusiastic.  He’s friendly, confident, and cheerful most of the time.  So with a bit of luck and detective work to sort out any remaining issues, I hope he will be my next competition horse (when Diego retires). 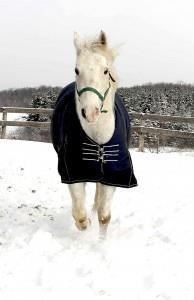