Veronica was here yesterday, industriously grooming the horses. It’s a bit hard to see anything on the darker horses, but King looks kind of cute in the midst of his own debris.

This winter I was very strict with the hay rationing (due to the shortage of hay in these parts). So King is looking a bit more svelte than usual. Still not exactly dainty. But no longer laughably huge anyway 🙂

She built a small pony from the results. That would be my size 9 clunker barn boots in the background to give you a relative idea of the size of the pile. 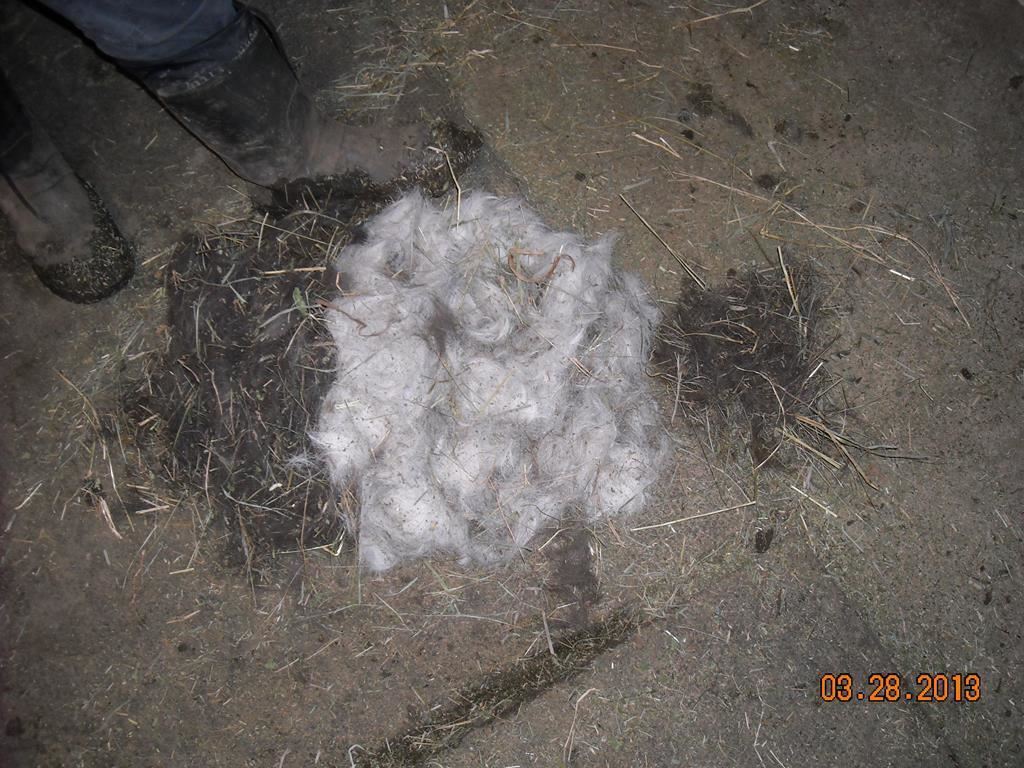 And here is Veronica’s girl, Ella, looking shiny and cheerful after all the attention. 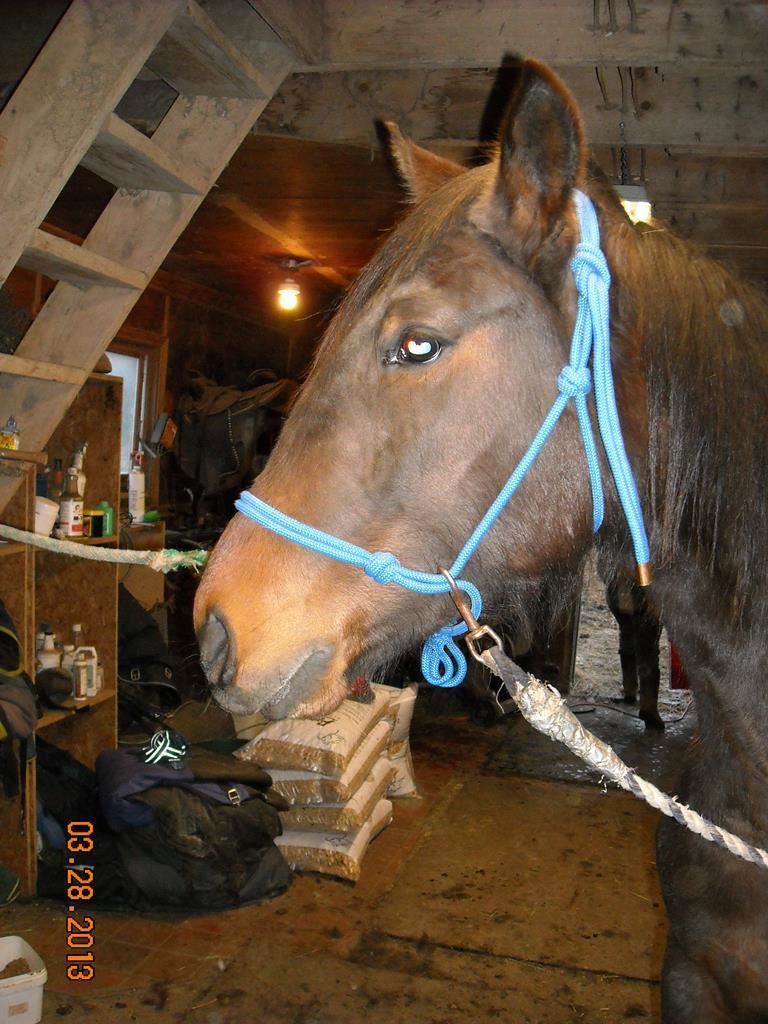 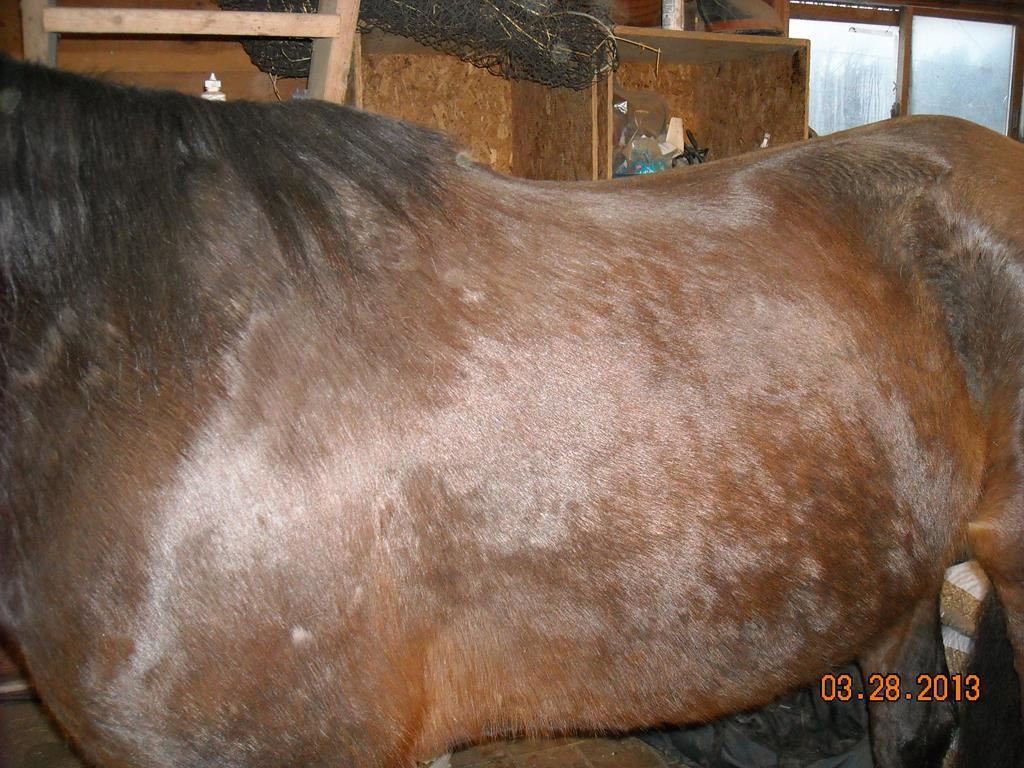 Most of the racehorses left for Woodbine yesterday. Harold, and the two boarded horses went first. That all went according to plan. All three loaded politely. The next trailer came for the youngsters. Willam, Monster, Freeman, and Winchester. All four got a bit of atravet (mild tranquilizer) ahead of time.

Monster, who last season loaded reluctantly but without any fireworks, had a whole new plan for this year. It surprised everyone, because he’s mostly a fairly placid and confident soul. But when Monster takes a notion, it is, like the rest of him, kind of a BIG notion. There were really way too many people there trying to help. And I think it just overwhelmed him. We did finally get him loaded, and all seemed to be okay when he started eating his hay.

After the chaos of loading Monster, I chased all the men away and sweet talked William onto the trailer using the same technique as last year. Rewarding every forward step with neck scratching, effusive praise, and the occasional covert kiss on the nose. This time Ana helped by lightly tapping his hip in a steady rhythm and stopping when he stepped forward. So that wonderful things happened when he went forward, and less comfortable (though not alarming) things happened when he did not go forward. William is a good soul, and cooperated very well.

Meanwhile though, Monster was getting a little cranky in the trailer. Kicking and pawing. I was a bit worried about that, and was pretty relieved when we got William into the next slant stall, hoping that would settle him down. Harri and I went to get Freeman and Winchester, the youngsters (3 year olds). This would be their first trip, so I was expecting it to take a while to load them. But as we led them towards the trailer, Monster completely lost it in the trailer. He reared up, and either hit his head or hit the end of his trailer tie, I’m not sure which. His hind feet slipped out from under him and he started thrashing around. One of his front legs got caught over the front wall and he went down with the leg caught over the wall. Then he really started fighting. The boss ran into the trailer and quickly pulled William off the trailer. William, bless his heart, looked puzzled and alarmed by Monster’s hysteria but exited quietly.

We threw William and the two younger boys into stalls while the boss and the shipper tried to get Monster untangled. The shipper went into the front of the trailer and managed to unhook Monster’s front leg. He dropped down, sort of upside down and thrashed around some more before somehow righting himself and coming up with the tie wrapped around the top of his head. The shipper, who kept a very cool head throughout, somehow got the halter off him, undid the trailer tie and put it back on while Monster stood there a bit shell-shocked by the whole deal.

Other than a couple of cuts, Monster appeared, rather miraculously, to be essentially unhurt. I reloaded William (exactly the same way as before), and he was such a good boy, he pretty much walked right on. I was very proud of him. He handled all that chaos with much more aplomb than I would have expected. He can be a very reactive guy, but he’s naturally so willing and kind that he will do anything you ask him if you just give him time to work up his courage.

We took Freeman and Winchester out of the stalls to load them up too. But then Monster started fussing again. The boss suddenly decided (very wisely I think) that we should not push our luck. They closed up the trailer and got on the road as fast as they could hustle. And we put Freeman and Winchester back out. They can go another day.

Word is that Monster is fine. He went out to train in the sand ring today and was sound. Ana, who is now hotwalking for the boss, tells me that he was a very good boy and quite cheerful when she walked him. Linda (who owns him) figures that Monster escaping injury like that pretty much guarantees that he will be a worthless racehorse since it’s the good ones who get hurt (she is joking… kind of…).

I’ve gotta say that for a few minutes there I was purely terrified for Monster. I literally felt sick to my stomach watching it, and waiting for blood and tragedy. He is, of course, my very favorite horse at work. Gorgeous, smart, and usually sort of goofy cool. Not too cool about trailer loading though apparently.

I really wish we had a trailer at work to practice loading these guys ahead of time. They are good boys. But it’s hard for them to just be loaded up like that with no advance training.

Yesterday I went back to work. My left arm is still very weak, by the end of the morning it was a little limp. But the elbow didn’t hurt. It was all a bit stiff this morning, but that worked out of it after an hour or so. I get tomorrow and Monday off, then back to regular work days again starting Tuesday. I think as long as I pace myself, it will hold up and the muscle strength should return. I was off for six months so it’s no surprise that it was so weak.

I had a chance to watch my kids in training. Reno, Al, and Esmerelda (who are two-year-olds now) are just being backed. Al is being a star. Willing, forward, and cooperative. Esmerelda is very good too, though she occasionally has a strong opinion about something. Reno is… well… a lot like his older brothers. Sigh. The rider who is coming in to start them called him “bone idle”. Which about covers it. A great deal of encouragement is required. But not too much or he just gets mulish, balky and mad. Monster and Vegas are Reno’s older brothers. And the whole lot of them really are bone idle lazy. Vegas outgrew his laziness, and Monster has improved some. So hopefully Reno will do the same. On a more positive note, he is turning into a very classy looking horse. He is easily standing 16.2hh already, and he looks like he’s still got some growing to do. Al is about the same. They are going to be a very imposing pair of horses!

Freeman and Winchester, the three-year-olds, are also being ridden regularly. They’ll be heading down to the track this spring for the first time. Though it will be quite some time before they actually race.

Freeman, who was a bit of a disaster as a yearling (horrible legs, and horrible brain) has improved beyond all recognition. His legs, while not exactly correct, are not at all frightening to look at anymore. And since he moves like a floating dream, he’s not likely to be hard on himself. He was a fairly crazy yearling. Uncatchable, unholdable, and an outrageously enthusiastic kicker. But some subversive clicker training really made a difference to his attitude about halters and humans, and since then he’s probably become the most cooperative of all the boys.

Winchester is quite handsome, but he really always was. He’s Loula’s firstborn. Loula is utterly gorgeous, and has passed on her glorious chromed chestnut good looks to him. He’s a whole lot nicer than Loula though. I call him “Cowpony”, because he is so mellow.

Monster and William, the four-year-olds are going back down to the track too of course. They went down last fall, but didn’t have enough training time to actually get to the races. They should this year though. I will definitely want to travel down for their first starts. Monster of course is my personal favorite of all of them. Big handsome lazy bum that he is.

Venice is turning out to be quite a lesson in patience for me. I kept thinking all along that we would have a big breakthrough and then would be able to sail along in our training after that. But what we are really having is tiny breakthrough after tiny breakthrough. Every single step has to be broken down into minutely smaller steps in order to progress. Every time I think we should just jump forward to a new stage, she makes me slow down and reassess what I’m doing.

She is the exact opposite of King, who was always leaping ahead of our lesson plan faster than I could keep up (leaving the inevitable gaping holes in his training). Every horse is a whole new education, that’s for sure.

I still have not gotten a halter on Venice. But I have been able to touch her and brush her over most of her right side. I am not allowed to touch her left side, or even look at it. So I have had to use a stick to reach around and touch the left side of her neck without seeing it. And then gradually over the last few days, she has allowed me to shift around so I can see that side of her. Sometimes. Each day it takes a bit less time for me to convince her that it’s safe to be touched or seen on that side.

I cannot touch her face. Just the edge of one cheek. However, she will reach out and touch me. And actually will do that quite often. Sometimes just with her whiskers, but yesterday she nudged me a couple of times. A pretty solid touch. I am beginning to think that maybe she likes me at least a little bit. Sometimes.